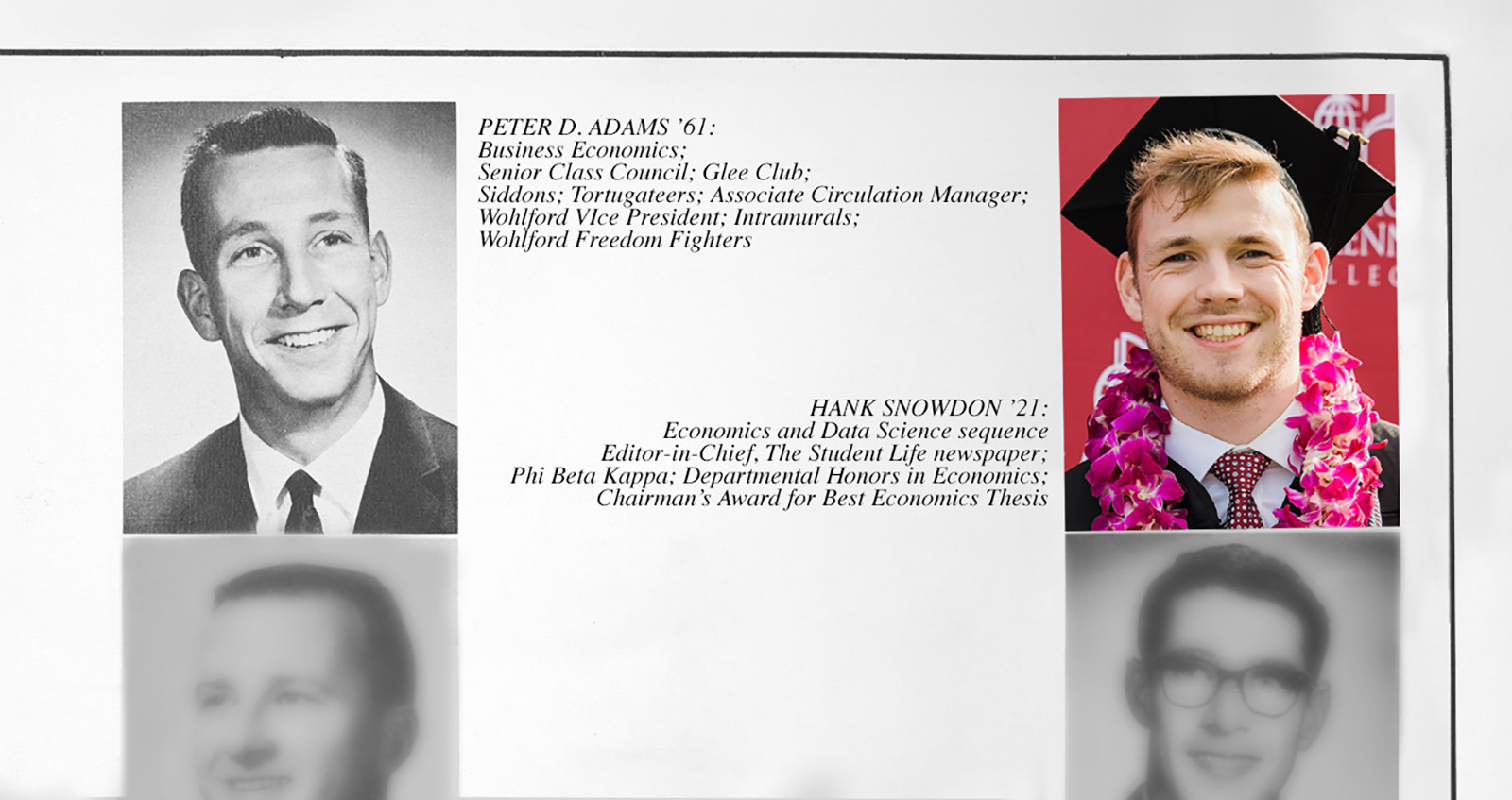 Peter Adams ’61 GP’21 and Hank Snowdon ’21 share a bond that goes beyond grandparent and grandchild — they share their CMC alma mater.

Despite being six decades apart, their CMC experience has several similarities. They both lived in Wohlford Hall; they both majored in Economics, (although Snowdon added a data science sequence, which didn’t exist in Adams’ day) and they both have a deep appreciation for CMC’s culture.

During a recent Zoom conversation inspired by Grandparents Day, Adams and Snowdon connected from their homes across the country. The two discussed their CMC experiences – including a few that even surprised one another.

A native of Ohio, Snowdon remembers touring campus with his grandfather when he was an 18-year-old high schooler. He appreciated the “intimacy and friendliness, the small class sizes, and the ability to get to know your peers.” At the time he thought, “This feels right.”

For Adams, whose father was CMC Trustee Arthur Adams (for whom Adams Hall is named), CMC helped him develop ways to find solutions, he said. “I was building a pyramid of knowledge, and that’s what has stayed with me all these years, a way of approaching a problem, as well as collaborating, learning how to do something better than you would have alone.”

The highlight of Adams’ time at CMC was meeting his future wife Rebecca “Becky” Scripps ’61.

“I’ve always thought it was meant to be,” he recalled.

When Adams entered CMC he was set to graduate in 1958, but he left the College to join the military, serving overseas in Germany. If he had stayed at CMC, he never would have met Becky.

“I was in the Army for three years. And when I came back, Becky was there, and that wouldn’t have happened if I hadn’t dropped out for three years,” he said. “That’s some kind of karma. We are going to celebrate 60 years of marriage next year, and it’s been wonderful.”

Adams shared that he grew up while in the Army, returning to CMC after three years more mature. “I was the old man on campus,” he said with an ironic laugh, noting that as “a proud Tortugateer, we had a lot of good times back then.”

While Snowdon didn’t take time off from CMC, his time on campus was affected by the Covid pandemic, which closed campus during his junior year. “That was an interesting time for sure,” Snowdon said ruefully. “But I still had a lot of good times and made a bunch of friends. I got a good two and a half years at Claremont.”

While a student, Snowdon served as the Editor-in-Chief of The Student Life (TSL) from 2019-2020. His senior thesis, “Would ‘Robot Umpires’ Reduce Discrimination? Measuring Racial Bias in Major League Baseball Umpires” won the Chairman’s award for best economics thesis. It also took off on social media.

Adams knew of Snowdon’s achievement and cheered him on. “You had an interesting idea and you had the capacity to delve into it and understand it and bring it out and present it. Man, I really think that’s a great job,” he said to his grandson.

Now a Research Associate at NERA Economic Consulting, Snowdon works on a team that specializes in mergers and acquisitions and antitrust problems. Based in Washington, D.C., he has penciled the upcoming alumni weekend in May 2022 onto his calendar. Meanwhile, Adams, in his role as a longtime board member of the Keck Center for International and Strategic Studies, regularly returns to campus.

In addition to his work with Keck, after Adams sold the family business in 2006, he and Becky founded the nonprofit Adams Legacy Foundation, with the mission to invest in organizations that work to get people outdoors and in researchers working to understand the health benefits of time in nature. Additionally, the Foundation supports those dedicated to preserving open space for generations to come.

Adams has also found time to paint, and mailing his paintings to his grandson across the country. “He sent me some paintings of different California scenes. They’re great for me to remember my time there,” said Snowdon.

“Since he left California, I thought he needed something to remind him of here,” Adams said.