A Bond Stronger than Time

A Bond Stronger than Time 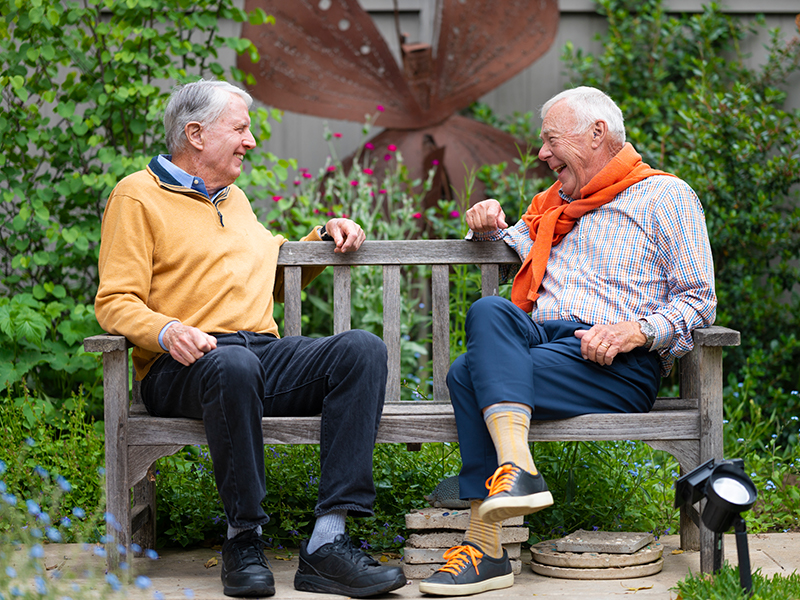 As Bob McCrary ’58 P’92 is quick to point out, there were “no cell phones, emails, or social media” in his era of CMC. In-person communication mattered most, especially when it came to making friends on a new college campus.

So, when McCrary met John Poer ’58 P’90, something immediately clicked. They both played high school golf and had 1950s-era Fords. They shared the same sense of humor. And above all, McCrary loved that Poer displayed a “what you see is what you get” attitude with his new classmates.

“He wasn’t trying to impress anyone. Just an honest, genuine guy,” McCrary says of Poer, nicknamed “Cactus” because of his Arizona roots. “We’ve always gotten along with each other. Always a great deal of respect,” Poer adds. “This was true when we were roommates for our last two years at CMC. And it has carried forward all of these years.”

We asked McCrary and Poer about their lasting friendship and how sharing a personal bond has also shaped an appreciation for giving back to the College where they met more than six decades ago.

Why did you choose CMC?

McCrary: I was looking for a small liberal arts college near my home in Los Angeles. Many of my friends went to UCLA, but it seemed too large for me. USC accepted me, but it seemed too close to home. My father mentioned that he had a friend whose son was attending a new college—Claremont Men’s College. I visited the school and liked the size. The prospect of playing competitive college golf was also appealing.

Poer: I interviewed at Pomona College as a senior in high school, and they suggested I also talk to CMC because of my business interests. I did, and decided on the spot that CMC was definitely for me.

How did the two of you meet?

Poer: Probably on the local driving range. We were both good, low handicap golfers. Freshmen were not eligible to play varsity sports in those days, so we started playing together during our first year.

McCrary: “Cactus” was the name given to John because he was from Arizona and was kind of skinny and tall. That name has stuck for all that knew him in college. We had many things in common when we first spoke; especially that we both liked competitive sports. I also loved his sense of humor.

What was special about CMC during your era?

McCrary: In the 1950s, a college’s size was an important issue for me. I felt like I was wanted at CMC. The College also offered a well-rounded education with emphases beyond academics—for instance, the development of “people skills.” In a small college, you live, work, and play together, which makes for the easy development of long-term relationships. Leadership also comes natural because of so many opportunities to get involved.

Poer: I went from a naïve freshman from a small town in Arizona to a much more confident and prepared (so I thought) graduate over those four years. I give the College all of the credit for preparing me for life after graduation.

As two of the longest consecutive givers to the College, why is it important that you remain involved?

McCrary: Giving is a state of mind. Many fail to give even a few dollars and give credit to the College for helping to form who and what they are. Many think their dollars mean nothing. That is too bad. My advice to current students is “you get out what you put in.” Give back and get involved in any and every activity that interests you, whether it’s glee club, intramural sports, dorm representation, or whatever else you can find on campus.

Poer: In the early ‘70s, I joined the Alumni Association Board and served as Alumni President in ’74-’75. I’m currently involved with the CMC Alumni Past President’s group, which is very active and meets at least once a year. Phone night was big in those days, and both Bob and I were involved in that together for many years. In the early ‘90s, I was asked to join the newly established CMS Athletic Hall of Fame committee, and eventually I chaired the nomination committee that sent the prospective candidates forward to the selection committee. I eventually joined the selection committee and serve on it today.

My suggestion to recent grads is to be thankful for such an opportunity and to give serious thought about how they can find ways to give back to CMC over time. Maybe a little bit at a time is a good way to start.