In August 1981, I arrived in Claremont from Mexico City. Back then, I never imagined that this lovely city, and southern California in general, would play such a key role… 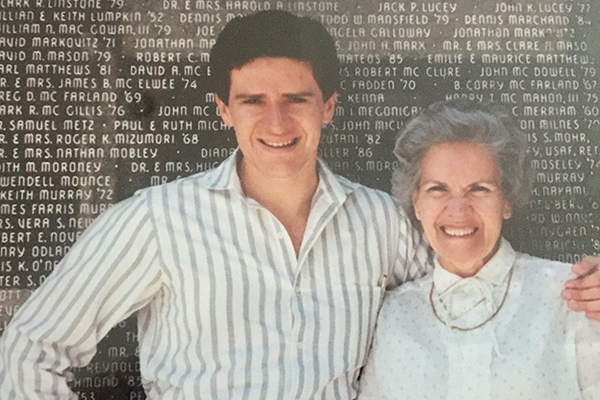 In August 1981, I arrived in Claremont from Mexico City. Back then, I never imagined that this lovely city, and southern California in general, would play such a key role in my life. I am very grateful that I was able to graduate from CMC.

At CMC I met my best friend in life, Andy Walter, class of ’85 as well. Our mothers met on one of my mother’s visits to Claremont and they became great friends too. After graduating from CMC in 1985 I went back to Mexico City, but until my mother’s passing in 1994 we came to southern California almost every year to spend Christmas with Andy, his mother Jeannie, his brother Sam, and his lovely grandmother Annie. We felt part of the Walter family, indeed.

Claremont, Pasadena, and Dana Point continued to be a top destination after I married my wife Veronica in September 1995. On our way to the orient, Claremont was our first stop in our honeymoon. We went to Collins, Beckett (my favorite dorm) and bought a few souvenirs at Huntley Bookstore. My wife gives me a hard time about that, and jokes about it with our son and daughter. We had a short, but very emotional stay with Andy and Jeannie.

We have a son, Ricardo (almost 24), and a daughter, Alejandra (21). As they were growing up, we travelled with them to southern California to visit Andy and Jeannie almost every summer and multiple Christmas seasons (family picture with Andy in Claremont attached). Both Ricardo and Alejandra see Andy and Jeannie as family.
During those trips, a visit to Claremont (at least one) was a must. My kids became familiar with Collins, Beckett (I was able to show them my first room, #210), Marks, Bauer, the Hub, the Athenaeum (where my name is engraved in the Donors’ wall, picture with my mother attached), and of course, Huntley Bookstore. We always went shopping for souvenirs, which we still have.

One time we even went to visit the late Professor Phil Koldewyn and his wife Wilma. I owe Professor Koldewyn a lot. He was a friend a mentor and a wonderful human being. He helped me survive my first semester, always willing to chat on any subject, preferably in Spanish!
I have left the best for last. Claremont became a key part of my life since 1981 when I came to the Claremont Colleges as a freshman. But forty years ago, I never imagined that one day my son and daughter would share that same experience with me:

I look forward to returning to Claremont in 2022 for the Class of 2020 Commencement. I am sure it will be amazing to be able to hug my son Ricardo, just as my mother hugged me at my CMC Commencement in 1985.

And, of course, I look forward to Alejandra’s 2023 Commencement in Scripps. It will be an extremely emotional moment, the closing of a cycle in Claremont for our family: the day that the 3rd graduate of one of the Claremont Colleges gets her diploma.

I am sure that my mother will be proudly watching both her grandchildren graduating from CMC and Scripps, respectively.