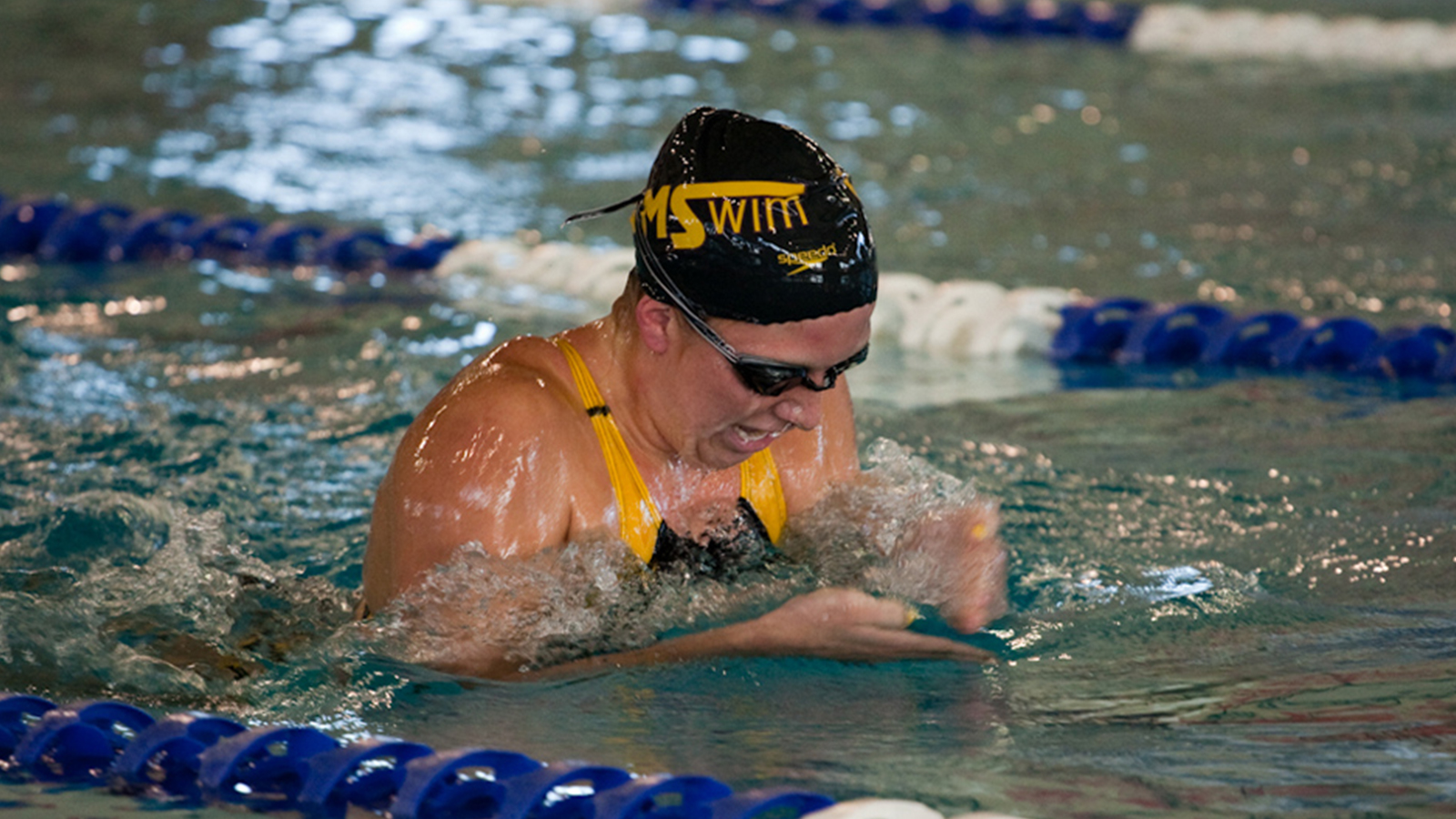 Annie Perizzolo ’11 made program history for CMS Women’s Swimming and Diving by becoming only the program’s third national champion … and then she became the fourth a day later. Perizzolo swept both breaststroke events for the Athenas at the 2010 NCAA Division III Championships, becoming the first female swimmer at CMS to win twice at the same trip to nationals. She clocked 1:01.84 in the 100 breaststroke, winning by almost two seconds, and added a dominant win in the 200 breaststroke in 2:14.83, taking first place by 3.5 seconds.

After a couple of near misses in the previous two years, Perizzolo wanted to make the 2010 nationals count.

“Personally, I placed second in the 200 breaststroke two years in a row prior to 2010,” she said. “The entire season, I had a sense of pressure to outperform the previous years. Coach Charlie (Griffiths) set us up for success with hard training and a well-planned taper. By the time we got on the pool deck at NCAAs that year, I don’t think there was anything that would get in our way.”

Perizzolo also adds a humorous anecdote that perfectly describes the focus that she and the Athenas had at the 2010 Championships “While I was happy and proud with my 100-breaststroke swim (and win), I almost immediately moved on to thinking about the races the next day,” she said. “If there needed to be proof of that, I left the 100-breaststroke award on the pool deck and Charlie got a call at dinner asking if his swimmer could come pick up the first-place award.”

Perizzolo was far from competing alone for CMS at nationals, as the Athenas finished in fifth place as a team, the highest finish in program history. Katie Bilotti ’12 also reached the medal stand twice as the second-place finisher in the 100 fly and as the third-place finisher in the 100 back. Elsa Cheng ’13, Tessa Dover ’11, Emma Jones ’12, Jenni Rinker HM’11 and Elica Sharifinia ’12 joined Perizzolo and Bilotti in winning All-America honors with the CMS medley relay teams.

The 200-medley relay team of Cheng, Perizzolo, Bilotti and Jones, and the 400-medley relay team of Dover, Perizzolo, Bilotti and Jones both finished second to Denison to add to the CMS point total. Individually, Dover also reached the finals of the 200 back, finishing sixth for 13 points, and became the first-ever winner of the newly-created Elite 88 Award (now the Elite 90 Award) for having the highest cumulative GPA of anyone competing at nationals. She won that award again when she returned to nationals as a senior in 2011.

“While NCAAs was a highlight of the 2010 season, it’s the moments leading up to it that really stick out to me,” said Perizzolo. “Our medley relay pushed ourselves all season to set the bar as high as we could and perform as well as we could, even when we didn’t have close races during the season. Specifically, I remember prelims of SCIACs that year. We were more than half a length ahead of the other teams but celebrated as if we won the lottery when we finished because we made an ‘A’ cut with that first swim. What an achievement.”

Bilotti also has vivid memories of the relay teams that season. “I still remember the magic of having trained all year together and knowing each other’s strokes, moods, and idiosyncrasies like our own,” she said. “I can still get goosebumps thinking about revving up for my Fly leg after the energy Annie always brought with the breaststroke. I think there was some unspoken collective weight knowing that it was Annie’s last year, so we had to leave it all in the pool no matter what.”