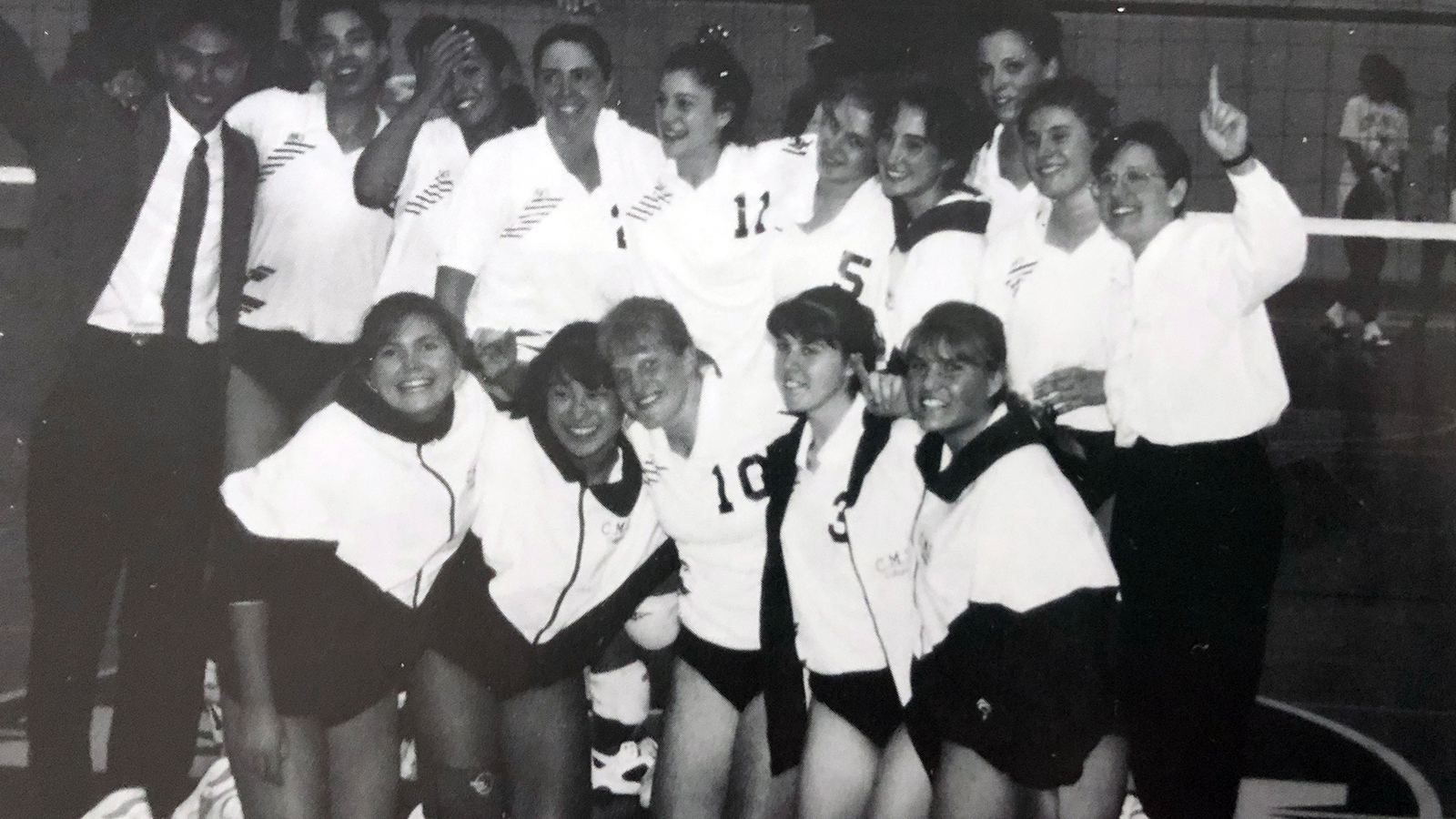 The 1992 CMS volleyball team finished in a three-way tie for its first-ever SCIAC Championship under first-year head coach Vicki Neault, and earned its second NCAA bid in program history. However, the Athenas spent the offseason knowing they were so close to having even more. Their three SCIAC losses were all 3-2 scores, including two to La Verne and one to Occidental, and CMS fell to La Verne 3-2 for the third time in the first round of the NCAA Tournament.

“In my sophomore year, Julie (Curtis) left and Vicki came on board,” said Paula (Preshaw) Davey (CMC ’94). “Our team was improving, but still not close to reaching our true potential. My junior year, Vicki wisely brought (assistant coach Robert Okamura) into the program and he was a true college-level skills coach, teaching us how to run quick sets and spending as much time as we possibly could in the gym.”

The hard work paid off, as CMS came through in a close race to take the outright SCIAC title and then beat Redlands (15-6, 15-9, 2-15, 15-12) on its home floor at Ducey Gymnasium for the first NCAA win in program history.

“I’m fairly certain I had the final match kill that earned us our 1993 league championship,” said Davey. “I recall being so in the zone that I wasn’t even tracking it was the last point and was shocked when everyone dog-piled me. It’s a mindset that continues to serve me today: just do your job as you were taught every time, don’t worry about anything else, and let the dog pile ensue.”

The Redlands win set up a regional semifinal matchup with Trinity (Texas) which provided all sorts of drama. CMS dropped the first set 16-14, but bounced back to take the second 15-11. The teams split the third and fourth, with the Tigers winning the third 15-9 and the Athenas tying it up 15-10 in the fourth. That set up the nail-biting fifth and final set, which went to rally scoring, and CMS was able to come through with a thrilling 15-13 win to advance to the regional finals (NCAA Quarterfinal Round), before the run ended in four sets to UC San Diego.

Middle blocker Vanessa McKenzie was SCIAC Player of the Year, while Zalika Milton, Natalya Preiser and Preshaw were named to the second team. The 1993 team remains prominent in the CMS record books: Preshaw and McKenzie still rank 1-2 in Athena history in blocks and Preiser still holds the school record in assists (4018).

“I loved every minute of it,” said Davey of the 1993 season. “We had so much fun on the court and on the bus rides. Not many of us were very close off the court, but it didn’t matter. When we were together, we were nothing but supportive, hard-working and FUN. When I’m asked to recall a single match, all of this is what comes to mind. Volleyball is about consistency and camaraderie over time and not letting the nerves or the big moments mess with your head; using the adrenaline to help you run down an ‘ungettable’ ball or hit a ball a little smarter or harder than usual.”