Pioneering Women and a Name Change for the College

Pioneering Women and a Name Change for the College 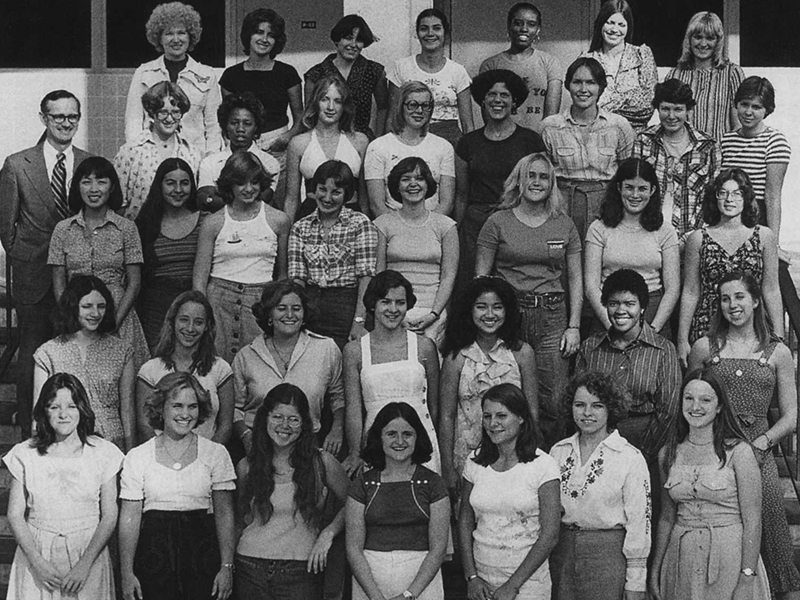 Serious discussion of the issue of coeducation at Claremont Men’s College began in July 1972. CMC President Jack Stark was a strong advocate for the College going coed. He first officially raised the question to the board of trustees and established the study committee under the leadership of trustee Ned Bailey. Stark, with his wife Jil Stark’s support, kept the College focused on the coed issue for three years.

On April 24, 1975, the trustees voted to admit women to CMC. The vote was 28 for coeducation and 13 in favor of maintaining the status quo. The first group of entering women were scheduled to enroll in academic year 1976-77.

On March 15, 1976, 17-year-old Kathleen Evans of Lakewood, Colorado, sent in her commitment deposit reserving a place in the class entering CMC the following fall. The daughter of a mining engineer, Evans had been raised at various places around the United States and in Australia. Like her father, a graduate of the Colorado School of Mines, and her older brother, a professional metallurgist, Evans looked forward to a career in mining engineering, metallurgy, or mineral economics. She enrolled in a joint CMC–Colorado School of Mines five-year dual-degree management-engineering program.

On the receipt of Evans’ deposit, the CMC public relations engine went into operation. Evans was flown to CMC as a guest of the College, where she met with Stark, faculty, students and staff, took a tour of the campus, attended classes, and was interviewed by KNBC-TV for its “On Campus” program. “Miss Evans typifies the student Claremont Men’s College strives to admit,” Stark told the media. “She is goal-oriented and highly motivated. We are delighted she will be attending CMC in the fall.”

Discussion of a name change for Claremont Men’s College started as early as 1975. By 1979, women constituted 23 percent of the undergraduate student body. In the fall of 1979, the trustees established a committee to study the name of the College. In September 1981, an expanded committee made its recommendation to the board. On Oct. 15, 1981, the board of trustees voted 34 to 5 to change its name to Claremont McKenna College.