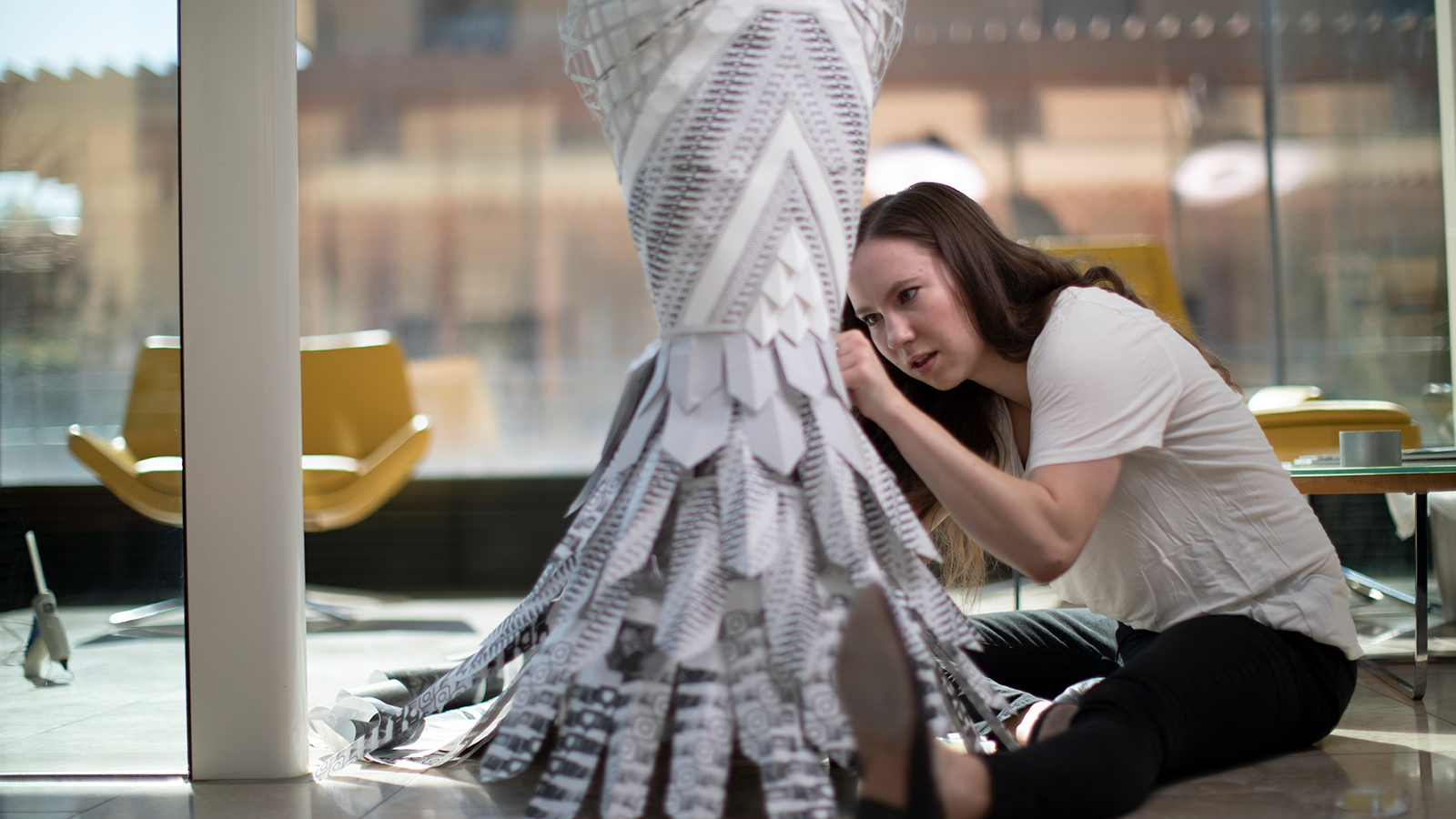 For someone who doesn’t spend a lot of time on social media, Tori Johnson ’21 sure knew how to make a bold, visual statement about it.

As part of her summer Creative Works Fellowship through the Gould Center for Humanistic Studies, Johnson created a papier-mache dress that serves as a mirror for how Instagram can negatively affect self-identity, especially in women. With seamstress skills stemming from childhood—Johnson joked that her favorite toy growing up was a hot glue gun—the economics and accounting major wanted to create something visually striking with a powerful message.

“As mental health awareness continues to improve, social media could become an opposing force. It propagates the idea that you must look perfect, be perfect,” said Johnson, a Colorado Springs native. “The conversation we have around its influence is important to me.”

The avant-garde dress is dotted with Instagram symbols and images from most-followed celebrities like Jennifer Lopez, Gigi Hadid, and Kendall Jenner. The shapely form and extension of the hips represent the ways that people manipulate their faces or bodies before posting an image, “a distortion of reality,” she said. The spikes on the back raise the form of the dress to indicate the way that social media “acts as an elevating platform—as you gain followers and popularity, you can rise in status.”

Johnson also used a black and white motif to exemplify “smiling depression,” or the pressure to always present one’s best self as if nothing is wrong internally. The detachable dress train, filled with Instagram celebrity photos, gradually darkens to resemble the endless cycle of comparison and superficiality, a “loop you are sucked into,” she said.

Johnson said she was inspired to research social media’s effects on self-esteem after a discussion about Instagram and identity in a philosophy class taught by professor Rima Basu. With Basu as her advisor on the Creative Works Fellowship, Johnson began crafting a research proposal around social media, self-identity, and culture, specifically in European countries with high- and low-usage rates like the United Kingdom (67 percent) and Germany (46 percent).

“When Tori first told me that she wanted to present the results of her exploration of social media by way of a dress, I was deeply intrigued but—I’m now almost embarrassed to confess—also a little bit skeptical. How would she pull something like that off?” said Amy Kind, Russell K. Pitzer Professor of Philosophy and director of the Gould Center. “It turns out that my skepticism was entirely misplaced. The dress is magnificent. Not only is it stunning to look at, but it also stunningly communicates its message about the threats that social media poses to one’s identity.”

In an interesting addendum, when Johnson spent the fall semester with CMC’s Silicon Valley Program, her social media dress was the catalyst for getting an internship in growth operations at Apple’s headquarters in Cupertino, Calif.

“The entire process of the fellowship was so important to growing my skill set,” she said. “So many things came up that I didn’t expect or that were much different from my original proposal—very liberal arts. I can see how that prepared me so well for working on ambiguous projects at a place like Apple.”